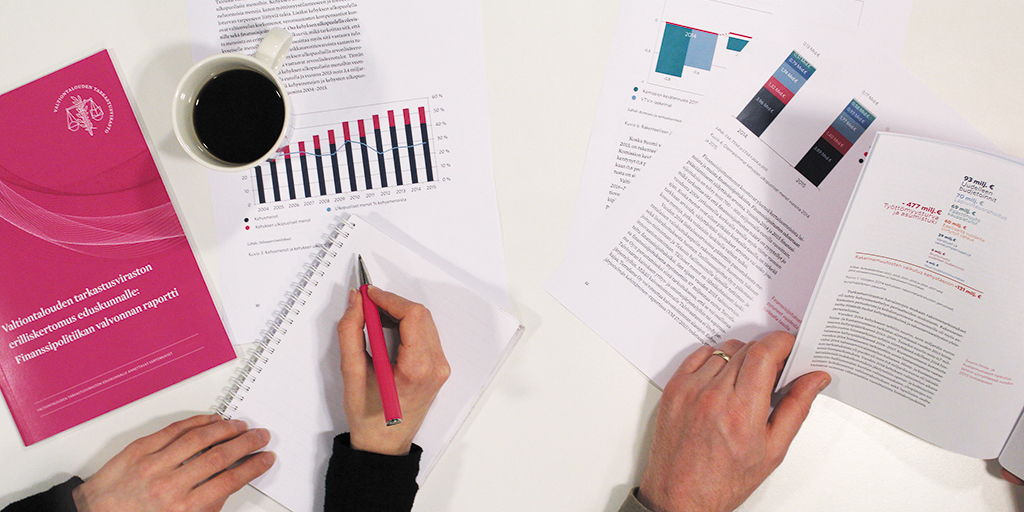 As part of its monitoring duties, the NAOF issues public assessments of and opinions on the achievement of the fiscal policy targets, compliance with the rules, impacts of the measures taken, and reliability of the forecasts of the Ministry of Finance.

Focus areas of operations and reporting in the planning period

The focus in the planning period will be on the development of the methods and tools used for assessing the impacts of fiscal policy measures, and the aim is to further increase the share of independent analysis in reporting. A key task in view of the objectives of the ongoing parliamentary term 2019–2022 will be assessing the employment measures taken by the Government. The development projects will examine the usability of macro-modelling and micro-simulation. If necessary, we will also utilize external research contracts.

The output gap has a key role for the rules and stance of the fiscal policy, and the NAOF will highlight the uncertainty related to its assessments and compare the results with those provided by alternative methods. In 2021, the NAOF will improve the visibility of the alternative description of cyclical conditions developed by the NAOF, i.e. the heat map and the composite indicator derived from it.

Because of the Covid-19 crisis, the escape clause that allows deviations from the achievement of the EU’s fiscal policy objectives remains in force in the EU in 2021. For this reason, the NAOF does not assess compliance with the preventive arm of the Stability and Growth Pact in 2021 as referred to in the European Fiscal Compact. The fiscal policy monitoring assessment to be published in May 2021 will focus on assessing the contents of the General Government Fiscal Plan of spring 2021 and the progress of the Government’s employment measures. A more extensive fiscal policy monitoring report will be published in December 2021 as a separate report submitted to Parliament. Because of the Covid-19 crisis, the assessments will, on a regular basis, deal with the economic measures taken by the Government to mitigate the economic impacts of the crisis. In addition to this, the assessments will pay attention to the stabilization of general government finances and debt sustainability after the crisis. Both reports will assess the realism of the economic forecast of the Ministry of Finance on which the General Government Fiscal Plan and the budget proposal are based.

The National Audit Office reports on its main observations in fiscal policy monitoring twice a year. In normal circumstances, the report published in the spring focuses on an ex-post examination of compliance with the Stability and Growth Pact and the spending limits, on the preparation of the General Government Fiscal Plan, and on assessing the realism of forecasts. The separate report to be submitted to Parliament towards the end of the year assesses the management of general government finances, compliance with the Stability and Growth Pact (ex-ante assessment), and achievement of the national goals and rules in the light of the budget proposal. The separate report to be issued at the end of 2022 will compile the observations made by fiscal policy monitoring and audit of the entire parliamentary term. The National Audit Office reports on the reliability of the forecasts of the Ministry of Finance regularly, approximately every two years. The next separate report focused on fiscal forecasts will be published in 2021.